When making a paper airplane, does the weight or thickness of the paper matter? Will a light or heavy paper airplane fly better? Let's find out!

Regular printer paper is probably what you reach for when you make a paper airplane, but is it the ideal thickness to maximize the performance of that airplane? Maybe an airplane made with thick heavy cardstock would fly further, or maybe a glider made with thin light tissue would stay aloft longer.

Let's experiment with different weights of paper and uncover the answer.

If you have read our article on paper sizes you may recall that there are two types of sizes used throughout the world. North America and some other places use "Letter Paper" and the rest of the world uses "A4" paper, which has slightly different dimensions. When talking about the weight of paper, there are also two systems. 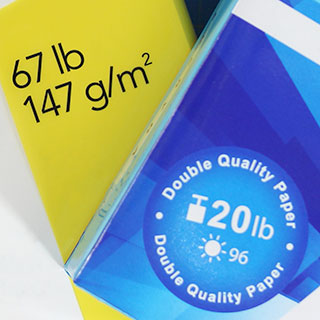 If you use Letter Paper, then your paper is measured using a system called "basis weight". This is the weight of one ream of paper, in pounds. Regular printer paper is typically labeled as "20 pounds" and is sold in a ream of 500 sheets. If you've ever picked up a ream of paper, you may notice that it doesn't weigh 20 pounds. This is because it's actually the weight of the base size of the paper during the manufacturing process before it is cut down to its final size. The base size of regular printer paper is 17 x 22 inches which is then cut down to make 4 pieces of paper. So....

A ream of "20 pound" paper that you buy in the store should weigh about 5 pounds. Unfortunately, different types of paper have different base sizes. The 17 x 22 inch size we mention is called "Bond" and you may see "bond weight" marked on the package. But there are other base sizes (Offset, Cover, Bristol, Index, Text, etc) so it's difficult to compare paper using this measurement system unless you know how each piece of paper is manufactured. As with most imperial measurement systems, it's complicated!

Luckily, the metric system is here to save the day, with a system called "grammage". Paper sold in office supply stores often has both measurements listed on the package to help us out.

If you use A4 paper, then your paper is measured using a system called "grammage". This is the area density or mass per unit area of a sheet of paper, and is usually expressed as grams per square meter (g/m2 or gsm).

This is a great measurement because you can easily compare different pieces of paper. For example, regular printer paper usually has a grammage of around 75 g/m2. If you get some paper that is labeled as 150 g/m2 then you would know that it is about twice the weight of regular paper.

Here is a small chart showing the conversion between different measurement systems. Please note that any paper over 170 g/m2 may not print in a normal home printer. Also, it can become difficult to fold paper airplanes once you get above 120 g/m2, especially if the paper airplane design you have chosen has a lot of small folds.

These links and others on this page are affiliate links. More info here

If you have a piece of paper with an unknown grammage, it's very easy to measure it. All you need is a small kitchen scale or accurate digital scale that can measure weights in tenths of a grams or better. 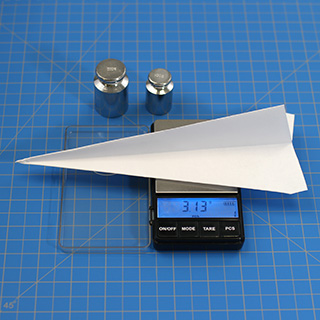 First, weigh a piece of paper and get its mass in grams. You may have to fold the paper so it fits on the scale without touching the table. You can then divide this mass by the area of the paper to get its grammage. Letter sized paper has an area of 0.06m2 and A4 paper has an area of 0.062m2. Suppose we weigh a piece of A4 paper and get 5 grams. If we divide 5 by 0.062 we get 80 g/m2 which would be a regular piece of printer paper. 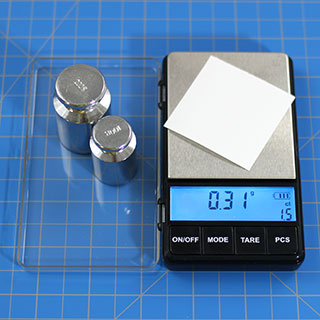 If you want the math to be a little easier, cut a piece of the mystery paper into a square that is 5cm on a side. This has an area of 25cm2. If you weigh this tiny square (in grams) and multiply this by 400, you have the grammage. You'll need an accurate scale that can measure tenths or hundredths of grams for this to work.

If you don't have a variety of thicknesses of paper on hand, you can purchase them from any office supply store, or check the links below. We recommend having at least four different weights to experiment with. You can use an old newspaper for a lightweight option. Just make sure you cut it down to the proper size.

Now that you have paper with a variety of different weights, we are ready to experiment and determine which is best. First, decide what we will be measuring. Are you trying to throw the airplane the furthest, have it stay aloft the longest, or some other criteria? If you are going for distance, we recommend the Basic Dart because it is quick and easy to fold. If you are going for time aloft, we recommend the Stealth Glider because it glides consistently without much adjustment.

Pick you favorite design and fold it using each different thickness of paper that you have. Make sure that each airplane is the same size and is folded the same way.

Now, let's make our hypothesis. A hypothesis is a guess about what we think will happen. For example, my hypothesis might be that a heavy dart will fly further than a light dart, or that a light glider will stay aloft longer than a heavy glider.

Finally, it's time to throw some paper airplanes. Pick a nice spot without much wind, preferably indoors, and throw each airplane. Try to be consistent with the force and angle of each throw. Throw each airplane multiple times to get a variety of measurements that we can plot on a graph.

Now that you have collected all of the data, it's time to analyze it. We are going to do this with a graph. Draw a blank graph with an x and y axis. The x-axis (horizontal) is going to be the weight of the paper in grammage. The y-axis (vertical) is going to be distance or time aloft (depending on the experiment). For each throw, plot a dot on the graph. For example, if your 162 gsm paper airplane flew 45 feet, you would find the 162 mark on the x-axis and then move up the y-axis to the 45 mark and draw your dot (shown in red below). You can average your results for each weight and draw a line to show the trend. You should end up with a graph similar to this one.

We conducted this experiment outdoors with a light breeze using a Basic Dart. Note the importance of throwing each airplane multiple times and calculating the average. The best and worst throws of the 162 gsm airplane differed by 17 feet. This is probably because of differences in wind and throw strength. If we had collected only 1 or 2 points of data for each weight, we might have gotten an incorrect picture. The more data points you collect, the more accurate your results will be.

What can we conclude from this data?

From our experiment, it seems like all of the paper airplanes flew roughly the same distance, regardless of paper weight. The lightest weight paper underperformed by a little bit, maybe because it was more affected by the wind, but in general there was very little difference. What did your results show? If you haven't done the experiment yet, what are you waiting for!

Did your results match your hypothesis? Our hypothesis was that heavier paper would fly further, and our results suggest that this is false. We were wrong! But thats OK. Using science, we learned something: The weight of the paper didn't seem to make a differences in the distance that a paper airplane can fly. Why is this?

To understand why weight doesn't make a difference we need to talk a little bit about physics. Once you throw a paper airplane, there are three forces that are causing it to stop flying: drag, lift and gravity. Drag is caused by friction with the air and causes the airplane to slow down. Lift is caused by air moving over the wings and pushes the airplane up. Drag and lift are mostly affected by the shape of the object. All of our paper airplanes were made the same size and the same shape, so they all would probably have had the same lift and drag as they pushed through the air.

So let's talk about gravity. A famous experiment was conducted by Galileo in the late 1500s when he dropped two balls of the same size but different masses off the Leaning Tower of Pisa. They landed at the exact same time, proving that gravity pulls all things downwards with the same force, regardless of their mass. If we think about this in the context of our paper airplane experiment we can see why we got the results that we did. All paper airplanes, regardless of their mass should fall to the ground at the same rate. So all three forces (drag, lift and gravity) were the same for our paper airplanes.

The variable strength of our throw and the variable force of wind acting on the airplane will account for the variability in our measurements from throw to throw. If we were to conduct this experiment indoors we could eliminate wind. If we constructed a robotic paper airplane launcher, we could reduce the variability in the strength of the throw. Doing these two things would give us cleaner data. See if you can do this yourself.

Each airplane design has unique aerodynamic properties. A different style of airplane may produce totally different results. You could repeat this experiment with a few different designs and see if you reach the same conclusions.

Congratulations! You just learned how to run a paper airplane experiment. If this was interesting, you should check out our other experiment where we see if the size of paper affects paper airplane performance.